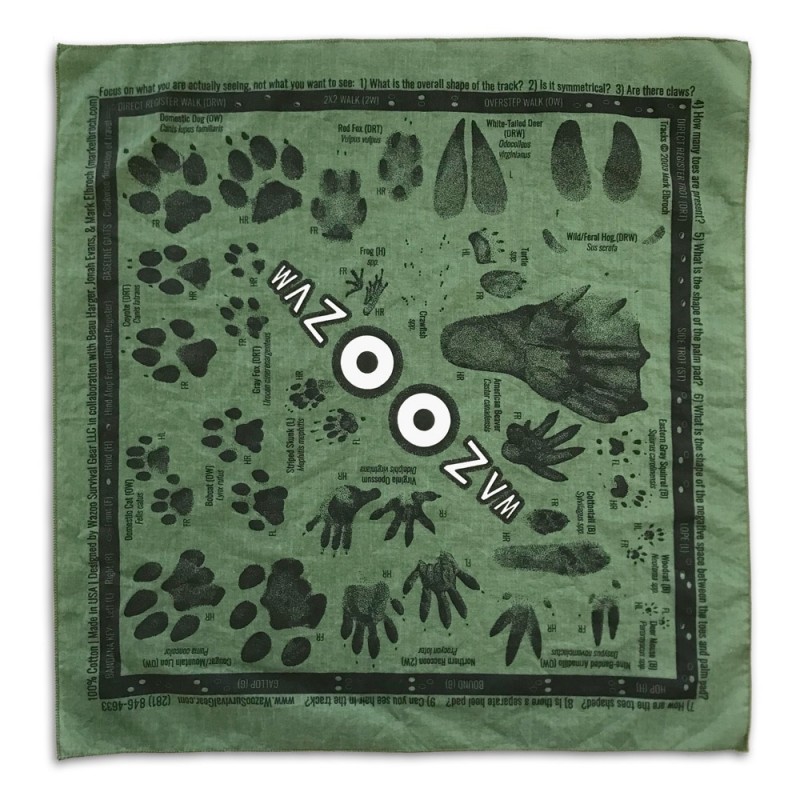 This tracking field kit from Wazoo contains a bandana featuring a range of accurately depicted US wildlife and a forensic style ruler.  The bandana is 22" x 22", made from cotton in the USA.

Accurate identification and interpretation of animal behaviour via track and sign is an outdoor skill that has been all but lost by the average person, even to the most experienced outdoors-folks. Learning even the basics of tracking will yield a more enriching awareness in nature as well as a practical tool when your life may depend on it. Animal tracking may aid you in finding a food source or avoid becoming one for a predator.

It should be acknowledged that this is not the first tracking bandana ever made, but hands (paws, hooves, or otherwise) down, it’s the most legitimate! It contains the most accurate tracks available, shown to scale, and includes default gaits for each animal.

We partnered with tracking experts to help guide us and choose the list of animals based on certain criteria that would allow you to have the most success with this bandana. We requested animals:

Found across the majority of North America

Most abundantly found in the wild

That may indicate water nearby

That are easy food sources

Most useful for side-by-side comparison

Animal Tracks Illustrated on the Bandana:

We also included false eyespots. These are a form of mimicry adapted by various insects, birds, fish, and reptiles, as well as by some human cultures, such as those living near tigers in the Ganges Delta in India. They wear a mask on the back of their head based on the theory that certain predators prefer to attack from behind (unseen). The bandana can be folded so the “eyes” face outward and can be worn on the back of the head to serve the same purpose, or worn on the front while napping.